Our Andean valley is capped by Volcan Tungurahua, a 5000+ meter stratovolcano that wakes up every eighty years or so and spouts fire for a decade or two. The ash lightly dusts our reserves and homes, a small price to pay to witness this spectacle of mountain-building before our very eyes. During this current eruptive cycle, which started in 1999, there are long periods (sometimes years) of calm. We begin to imagine that it has gone back to sleep, but a year is a blink of an eye on a geological timescale, and means nothing. Last week, after a few months of calm, the volcano started up again. The seismographs located on the volcano normally look like this:

Seismograph of Volcan Tungurahua last week. We don’t get much sleep when the volcano is vibrating this much.
Seismographs are from the Instituto Geofisico, Escuela Politecnica Nacional, available live at http://www.igepn.edu.ec/index.php/sismos/senalessismicas.html
The top item is the most relevant.

The volcano was dormant for eighty years or so when I first moved to Banos, and I never imagined it could erupt. 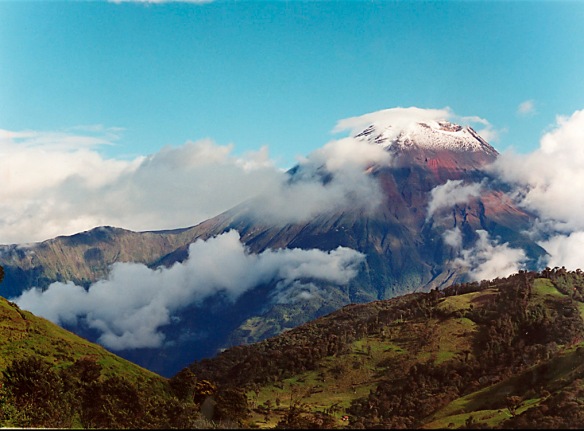 When I arrived in Banos fifteen years ago, the volcano had been dormant for about seventy years. Banos is located right at the base of this lovely-looking mountain. It never occurred to me that it might erupt. Photo: Lou Jost.

Our world was shattered in 1999 when it came to life and forced the sudden evacuation of my town.

By late 1999 it was doing this, and we all had to leave our town, our friends, our livelihoods. Photo: Lou Jost.

Many local people imagined we would be gone for a day or two, but the volcano kept spouting rocks and ash.People had left their pets in their houses with a bit of water and food, left their farm animals, left their crops and their livelihoods. The Ecuadorian military closed off the town for three months. I sneaked in through the mountains one day, to visit this ghost town with ash drifts in the streets. It was silent. Even the street dogs were lying dead.

When other Banos spies took video of some military men looting houses in the deserted town, the people decided to take their town back. They marched en masse and the military faced them down on the long narrow bridge that is the only direct route into the town from the west. The military shot and killed a marcher, ostensibly to protect him from the volcano. This enraged the townspeople, who quickly managed to kidnap six soldiers. The townspeople threatened them with death if the governor did not order the troops to withdraw from Banos. The governor did so and Banos returned to life.

We learned to live with our volcano. However, in 2006, around the time EcoMinga was founded, the volcano once again shattered our expectations. The whole town shook like never before. At 3 pm I climbed up the lower flanks of the volcano at 2100 meters, where I was building my house, to get a good view. (Banos itself, at 1800 meters, does not have a clear view.) The explosions were so violent that the shock waves made silver bubbles in the air expanding at the speed of sound, and when the wavefront reached me I could feel it hit my clothes and my skin, every few seconds. Late in the afternoon I could see clouds of volcanic material rolling down the west flank, and though I did not know it at the time, this material buried the western access to the town. I stayed transfixed until after dark. 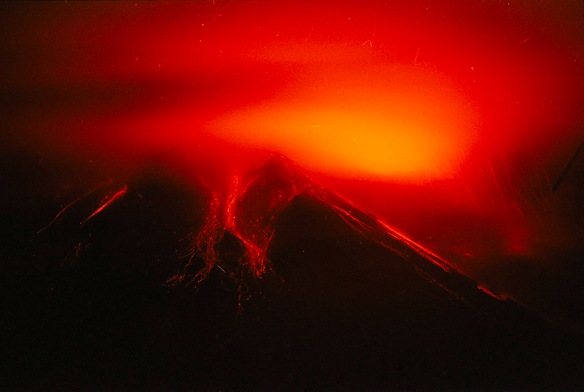 Volcan Tungurahua’s massive 2006 eruption, which killed about five people. The death toll would have been much higher but for the early warning provided by the Instituto Geofisico, which monitors the volcano constantly. The people in the zone of highest risk had about five hours advance warning. A heavy dusting of ash fell in EcoMinga’s Cerro Candelaria Reserve after this. Photo: Lou Jost.

When I came down into a mostly-empty Banos, every window and door was vibrating; it was like a ghost town, but with real ghosts rattling everything that was loose. The volcano made a continuous sound like a jet taking off, and lightning flashed from the crater, along with molten rocks. At around midnight the violence cut the power lines to Banos, eliminating also the volcano alarm system set up by the government without battery backup. I tried to sleep but the explosions shook everything too much. Suddenly an odd sound, like hail…I went outside and stones of pumice were falling. Would bigger stones be coming? Everyone fled into the streets, many with chairs on their heads to protect themselves from the stones. I grabbed a board for my head and took shelter under a two-story building with many of my neighbors, who figured that two roofs over our heads would be better than one. The streets filled with cars and people trying to get out. It rained stones for an hour, gradually diminishing in size, until by the end it was like snow falling, and all was silent.

Since then, the volcano has been erupting sporadically but spectacularly. Today it seems to have calmed down again compared to last week. Here are some images from the last few years, all taken from my house on its north flank. Click on any one to enlarge: 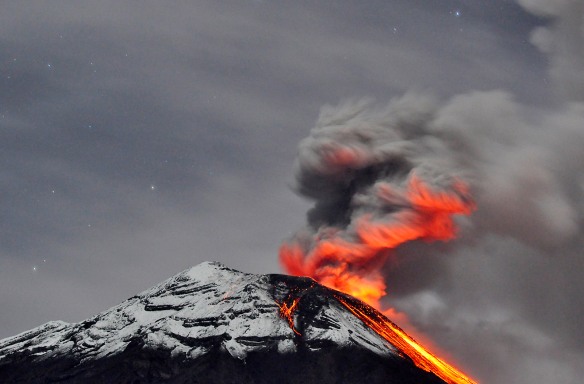 Eruption over snow, with the lava glow reflected in the ash cloud. Long exposure on a moonlit night. Photo: Lou Jost. 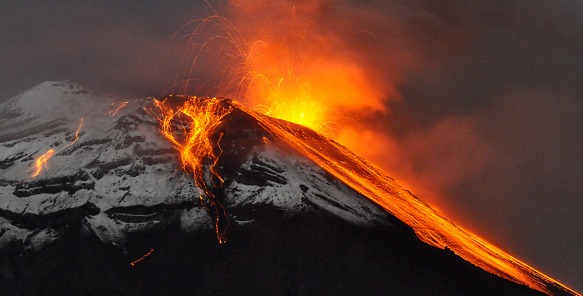 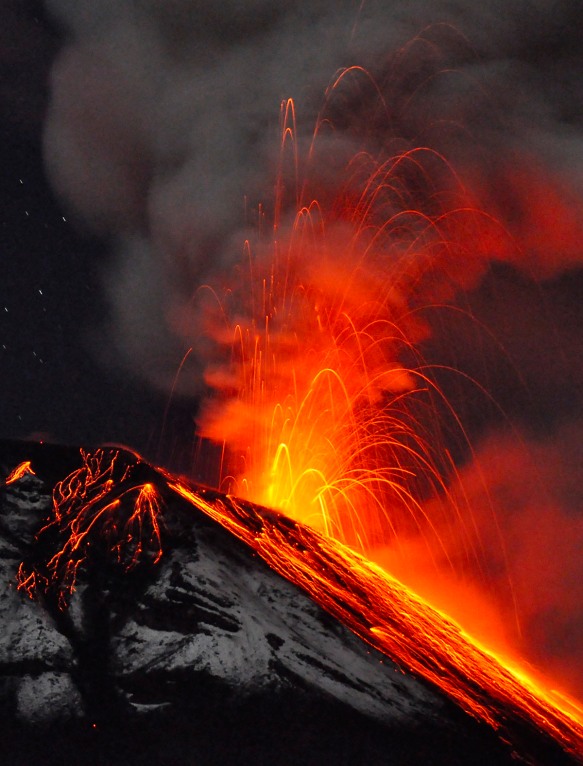 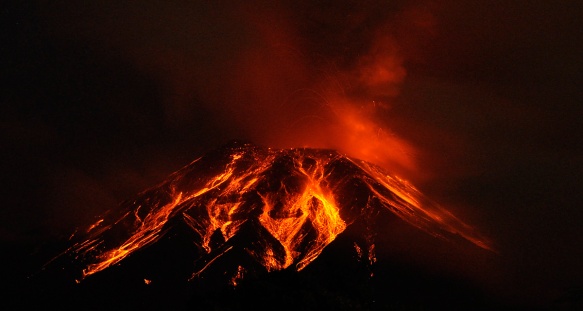 Rivulets of lava on a moonless night after snowcap had melted. Photo: Lou Jost. 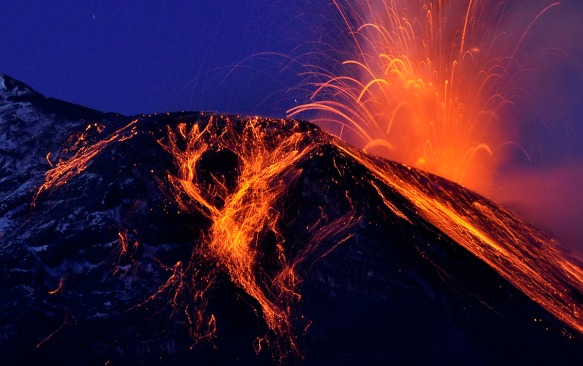