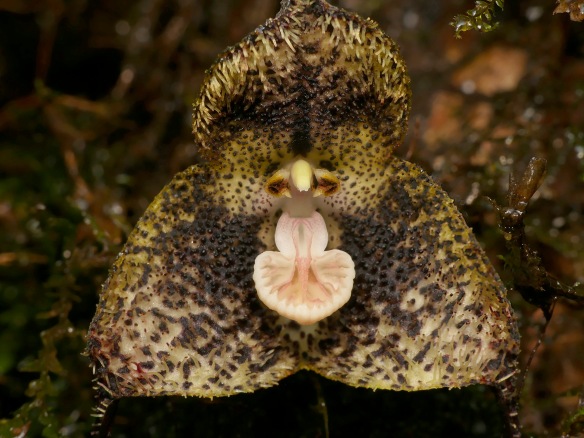 “Forests in the Sky”— This is the ridge we are currently exploring in our new Rio Machay Reserve. Click to enlarge. Photo: Lou Jost/EcoMinga.

Our new Rio Machay Reserve near Banos and the Rio Pastaza protects Cerro Mayordomo, in the Llanganates mountains of the eastern Andes of Ecuador. Cerro Mayordomo is shaped like a horseshoe with the open end facing south; the Rio Machay runs through the center of the “horseshoe”. From 1996 to about 2004 I spent a lot of time exploring the western arm of the horseshoe, but only visited the eastern arm once or twice. A poisonous tree called Toxicodendron (same genus as American poison ivy) is common near the beginning of the trail up the eastern arm, and I developed a nasty allergy to it. A week after my last trip there (2004?), my eyes were swollen shut and yellow liquid dripped from my earlobes, and I nearly clawed my skin off from itching…. Since then I thought it best to avoid that ridge. (Note: I now know there is a simple cure: Prednisone, which cures me completely in less than half an hour!)

Now that we own it, we’ve begun to explore it once more, with eyes that have been trained by ten additional years of exposure to interesting plants in our area. Juan Pablo Reyes, Fausto Recalde, and Luis Recalde went up last week, and came back safe and sound without developing rashes. They went as far as they could in one day, clearing the old trail from 1500m to 2200m. They stopped for lunch at the highest point. As Luis was eating he looked at the ground and noticed a fallen bract, which to almost anyone else would have been completely meaningless. But Luis shouted “Magnolia!” and he was right. It was a piece of a Magnolia flower that had fallen from the canopy. He had recognized it because he had worked many weeks with Dr Antonio Vazquez and students, studying two newly discovered Magnolia tree species in the Rio Zunac Reserve in the Cordillera Abitagua, just 15 km to the east of this ridge. Luis, Fausto, and Juan Pablo looked around and found two Magnolia trees near the trail. Here is their photo of the leaves and flower bud:

This was a remarkable discovery. The local people here do not know these plants (except for our men); they have no local name. Apparently Magnolias have always been very rare here. I sent pictures of these leaves to Dr Vazquez, who said it was Magnolia vargasiana, one of the two new species discovered in the Rio Zunac Reserve. Luis, however, felt the flower bud was much smaller than that species. Perhaps the flower bud was very immature.

Fausto Recalde now has a great eye for the orchid genus Dracula, and he found some there near the lunch spot. This was also exciting news for us, as we had never found any Dracula species in the Banos area on any of the mountains except the easternmost one, the Cordillera Abitagua. Unfortunately he couldn’t find any flowers, so we didn’t know which species it was.

The three men also found one of my favorite orchid species, Masdevallia teagueii. Up to now this plant had only been found in our area on the Cordillera Abitagua and other mountains to the east. This strange flower has a trap mechanism like a Venus’ Flytrap; when a small Drosophila-like fly lands on the lip, the lip of the flower instantly snaps shut, trapping the fly. In order to escape, the fly has to squeeze past the stigma and anther of the orchid, thus ensuring pollination (if the fly had pollinia previously attached to it) and deposition of its own pollinia (which are waxy chunks of pollen attached to sticky plunger-like pads that glue themselves to the insect). After twenty minutes the lip opens and the flower can do it again.

There are very few orchids that have active lips like this. Three other orchid genera in our area have independently evolved this ability: Acostaea, Porroglossum, and Condylago (all in the Pleurothallidinae, the same subtribe as Masdevallia teagueii). Incredibly, each of the four genera evolved a completely different engineering solution to accomplish the motion. In Masdevallia teagueii the heavy lip is attached to the rest of the flower by a thin concave strip of tissue. When stimulated, it instantly changes concavity, flipping the lip upward. The stimulus signal may be electrical.

I discovered the sensitivity of the lip in the 1990s. Prior to that discovery the plant seemed like a normal Masdevallia, where it had been placed originally. But after the discovery of this extraordinary snapping ability, and the unusual structures underlying it, the world expert in these orchids, Dr Carl Luer, decided to establish a new genus for this plant. He named the genus after me, “Jostia“. But later molecular phylogenies based on DNA showed that this plant was embedded in the same branch of the orchid family tree as the normal Masdevallia species. So “my” genus got sunk and the plant is now once again called Masdevallia teagueii. (By the way, the specific name honors the same Walter Teague who was honored by the genus Teagueia, which I have discussed extensively elsewhere.)

Of course I wanted to see all these exciting finds of Juan Pablo, Luis, and Fausto. I waited a few days to make sure the rangers and Juan Pablo didn’t swell up and drip yellow liquid from their ears. They didn’t, so I dared to go up myself, especially to try to find a flower of the Magnolia, and to look more closely at the Dracula plants. I made an extra effort not to touch the trunks of any tree along the trail, to avoid the poison tree. The climb was more difficult than I had remembered from twenty years ago….I hate getting old!!!….but I did make it to the point where the earlier group had turned around. I was pleased to find one of the species I had discovered on the west arm of Mayordomo decades earlier, Lepanthes aprina. It also turns up on Cerro Candelaria to the south (same climate), but not on the cordilleras to the east (wetter) or to the west (drier). I also found Lepanthes jackinpyxa (latin for “jack-in-the-box”, named by Carl Luer), which I had never seen before on this mountain. It was previously known in this area only from the Cordillera Abitagua, where it grows in the same forest as Magnolia vargasiana.

Lepanthes aprina, endemic to the second line of mountains facing Amazonia in our area, first discovered in what is now our Rio Machay Reserve. The name “aprina” means “tusks”. Photo: Lou Jost/EcoMinga.

I tried hard to find the Magnolia that our rangers had found, but couldn’t locate it in the heavy rain that struck just then (meanwhile Banos itself was sunny all day). As I was leaving, disappointed, something subconscious called my attention to a tree some distance from the trail. It turned out to be a Magnolia! But it was very different from the one the guards had found. This one had much longer, tapered leaves, and long slender petioles. I really don’t know why I went to look at it—that was the only tree of the thousands I passed that day which caught my eye like that. Dr Vazquez thinks that my individual may be a juvenile leaf of M. vargasiana, or an undescribed species. It had no flower buds. I’ll have to go back.

The Magnolia I found Sunday. Note the distinctive stipule scar on the stem and on the leaf petiole. These, in combination with an aromatic leaf odor, are diagnostic for the genus Magnolia. Photo: Lou Jost/EcoMinga.

Then I found some Dracula plants! It looked like there might be two species here, based on the leaf shapes. I examined many plants until I managed to find a flower. It was Dracula fuligifera, which had always been considered a Cordillera Abitagua endemic. Very exciting! 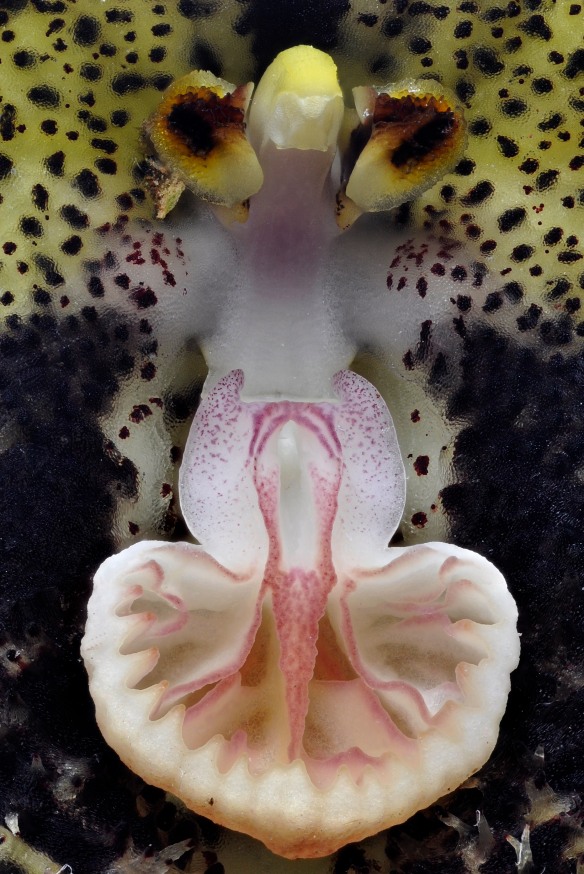 Dracula fuligifera central flower structure. This picture was constructed from about twenty images taken with light that passed through a polarizer, with another polarizer on the lens. The polarizer on the lens was aligned perpendicularly to the polarizer on the light source, cutting out all shiny reflections. If you click to enlarge the image you can see that in the areas where the flower cells are transparent, the camera is seeing through the top layer of cells and photographing the underlying layers. The lip imitates the gills of a mushroom and attracts fungus gnats, which pollinate the flower. Photo: Lou Jost/EcoMinga.

The World Land Trust still needs to raise some of the funds to make our final payment on the Rio Machay Reserve. Help them if you can!

Flowers of a Salvia species in the Rio Machay Reserve. This same species is also found in the Cordillera Abitagua. Photo: Lou Jost/EcoMinga.

A military footnote: A US military manual for soldiers in Ecuador warns of the Toxicodendron tree: “Plants most important to military personnel are Toxicodendron spp. and Anacardium occidentale (cashew nut)…These are abundant at many CONUS installations, often causing skin reactions that require soldiers to be placed “on quarters” or occasionally in the hospital. The seriousness of lesions caused by poison ivy or poison oak is exacerbated in the tropics…”

8 thoughts on “Exploring the “Forests in the Sky”: our new Rio Machay Reserve, east ridge”