Critically endangered Phragmipedium fischeri in northwest Ecuador near our Dracula Reserve. Click this and any other photo to enlarge. Photo: Luis Baquero and Gabriel Iturralde.

The ladyslipper orchids are among the most distinctive and beloved plants in the world. They are an ancient group, diverging from the other orchids while dinosaurs still walked among them. But today their beautiful intricate flowers have been their undoing, as plant collectors combine with habitat destruction drive them to extinction around the world. A  recent effort by Kew Gardens to assess their conservation status worldwide has shown that 79% of the world’s slipper orchid species are either vulnerable or endangered. Though slipper orchids make up less than 2% of all orchid species, they include 37% of all critically endangered orchids.

Slipper orchids are especially vulnerable to overcollection and habitat destruction because most species have specific soil and moisture requirements. Extreme soils with very high or very low pH values are favored, and many species require constant moisture. Habitat for most species is therefore scarce and patchy even in undisturbed areas. It doesn’t take much disturbance to make these populations disappear.

The ladyslippers are instantly recognizable by their pouched flowers. Insects enter the wide mouth of the pouch and then find themselves trapped inside. The inner surfaces of the pouch are mostly smooth but there is usually a ladder made of hairs on itsinside back surface. The insect climbs this ladder, passing under the flower’s stigma and then under one of its anthers in order to escape out one of the two openings at the top of the tube. If the insect is the right size, it rubs against both the stigma and the anther as it escapes, pollinating the flower if the insect already had pollen on its back from another ladyslipper flower. The escape path is clear in this cutaway view of Phragmipedium pearcei, the slipper orchid which grows in our Rio Anzu Reserve.

Top view of the “slipper” or lip of the ladyslipper orchid Phragmipedium pearcei. Lou Jost/EcoMinga.

Slipper orchids have a wide variety of tricks to entice insects into their traps. Some of the most surprising tricks have only been discovered in the last few years. I’ll discuss these below as I survey the different genera of slipper orchids; we’ll see how some of these tricks have arisen independently in slipper orchids on opposite sides of the world.

Many readers will be familiar with the temperate zone ladyslippers, genus Cypripedium, found throughout North America, Europe, and temperate Asia. These include the familiar Pink Ladyslipper and Yellow Ladyslipper of the US and Canada. Genetic analysis shows that this genus is the oldest branch in the ladyslipper family tree. These orchids have thin oval leaves with prominent parallel veins, a trait they share with the next-oldest branch of slipper orchids, the genus Selenipedium, which are today found only in small scattered populations in tropical and subtropical Latin America. The common ancestor of the ladyslippers probably had leaves similar to these.

Cypripedium and Selenipedium, like most slipper orchids, are usually pollinated by bees, wasps, or flies. Some Cypripedium ladyslippers with large slits or openings in their pouches, like the Pink Ladyslipper of the US (C. acaule, above), are pollinated by large queen Bombus bees (see Davis 1986 for observations of Pink Ladyslipper pollination). Cypripedium tibeticum in China (see photo below) is pollinated by queen bees that are not carrying provisions for their young, indicating that they had not yet established a nest. Scientists suspect that the pouch in this species imitates a mouse hole, where queen bees usually build their nests (Pemberton 2014). Several other Cypripedium species have similar morphologies so this might be a more common strategy than people have realized. Even the Pink Ladyslipper may fall into this category, though most previous workers have interpreted them as food-deceit flowers.

Many Cypripedium species, especially the Chinese species, have very unusual flower morphologies that hint at strange new pollination syndromes. Perhaps the most surprising pollination strategy was recently discovered in the endangered Chinese Cypripedium fargesii. The leaves of this species are spotted blackish green, and each spot has a darker black center. They look exactly like the spots on plant leaves infected by certain fungi. The C. fargesii flower and freckled foliage fool a fly that feeds on the spores of this fungus. It falls into the trap and fertilizes the flower. Full details in “Flowers of Cypripedium fargesii (Orchidaceae) fool flat-footed flies (Platypezidae) by faking fungus-infected foliage”

Besides these genera of slipper orchids with thin leaves showing prominent parallel ridges and valleys (“plicate-leaved” genera), there are three genera of slipper orchids with thick smooth leathery leaves whose veins (except for a sharp midvein where the leaf is folded) are not visible (“conduplicate-leaved” genera). These are the Asian genus Paphiopedilum and the closely-related Latin American genera Phragmipedium and Mexipedium. These three genera share a common ancestor that diverged from the plicate-leaved Cypripedium and Selenipedium about 60 million years ago; the New and Old World conduplicate-leaved slipper orchids diverged from each other around 23 million years ago. Some of the species in these genera have evolved pollination strategies similar to those of Cypripedium, but many of them have evolved novel strategies that have no parallel in the temperate zone.

I’ve written once before about the pollination strategy of Phragmipedium pearcei in our Rio Anzu Reserve. The pouch has white flaps at the top, and these are dotted with little fake green aphids and some light brown blobs that might be fake aphid wings. Female hoverflies hunt aphid colonies and lay their eggs on them; their larvae will devour the aphids. These hoverflies try to lay their eggs on the fake aphids and bounce off the white flaps into the open pouch (Pemberton 2014), where they are manipulated by the orchid, effecting pollination (see photos of this species at the beginning of this post).

Phragmipedium pearcei has green fake aphids on the white flaps at the top of its pouch. Syrphid flies have larvae that eat aphids, so the females land on the lip to lay eggs in the fake aphid colony. When they land they slipo and fall into the pouch. Photo: Nigel Simpson.

The staminode above the “slipper” or lip of Phrag. pearcei. At this magnification the green spots on the lip begin to show their true complexity. Lou Jost/EcoMinga.

Many other tropical American Phragmipedium species have these same green dots and are certainly pollinated in the same way. Our Ecuadorian Phrag. boisserianum, Phrag. caudatum, Phrag. longifolium (which grows in our Dracula Reserve), and Phrag. wallisii, among others, belong to this group. Perhaps the endangered Phrag. hirtzii (which might also grow in our Dracula Reserve) has a similar strategy.

Curiously the Old World genus Paphiopedilum also has many species with a broadly similar floral structure. Some of them, like Paph. venustum below, have some raised shiny yellow dots on the upper flaps of the pouch, and these may imitate scale insects. The green-spotted staminode (the top flap that covers the anther and stigma) may also be imitating aphids.

Likewise there are both New World Phragmipedium species and Old World Paphiopedilum species that have evolved another flower form, round-petalled white and pink flowers with yellow staminodes whose function is not yet understood. Phragmipedium schlimii and the critically endangered Phrag. fischeri are two Ecuadorian examples of this syndrome. The critically endangered Asian Paphiopedilum delenatii has evolved a strikingly similar flower. The North American Cypripedium reginae flower is also broadly similar. Maybe they all share a common strategy, perhaps luring bees looking for food, but we don’t really know. 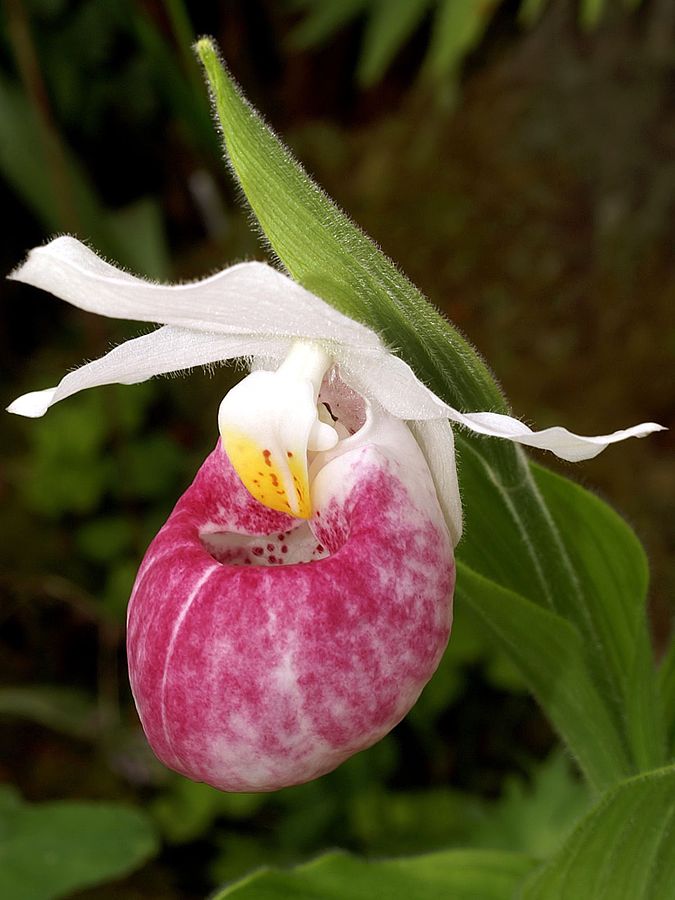 The brightly-colored Phragmipedium bessae from southern Ecuador and northern Peru breaks all the rules for this genus. Early speculations about its pollinator (butterflies and hummingbirds were suggested) were poorly concieved and completely wrong. Sometimes our imagination is just too limited. Also, it is difficult for us to take into account the huge differences between insect color vision and our own. It now appears that this bright Phragmipedium attracts a wasp that parasitizes larvae of large beetles (Pemberton 2014). No one has any idea why they are attracted to this flower, though. We also do not know what pollinates the newly discovered Phragmipedium kovachii, the largest and most spectacular member of the genus, which has already been ruthlessly stripped from almost all accessible sites in its limited range in northern Peru.

There is one oddball Phragmipedium, quite common on rocky outcrops near our Banos-area reserves, which is self-pollinated. This species is derived from something like Phrag. wallisii or Phrag. caudatum, which are similar to our Phrag. pearcei but with much longer petals that hang down to the ground. In Phrag. lindenii a mutation has affected the symmetry of the flower. The pouch was converted to an ordinary petal like the other two (the pouch is also a petal, but a highly modified one). In a normal Phragmipedium there is an anther at the base of each of the two normal petals. The mutation in Phrag. lindenii not only adds a third normal petal, it also adds an anther at its base, as in the other two petals. But this third anther grows directly into the stigma, thus fertilizing the flower automatically. Every flower always sets seed. This is a very successful short-term strategy compared to the normal strategy of waiting to attract and fool a pollinator. Most normal slipper orchid flowers rarely set seed.

View of Phrag. lindenii with left petal removed., The left anther and the mutant third anther are visible.; the latter grows directly into the stigma, fertilizing the flower. Photo: Lou Jost.

The Asian Paphiopedilum slipper orchids are very diverse, and many of them have flowers whose pollinators are complete mysteries. Here are some:

It is easy to see why people fall in love with these amazing plants and become passionate about them. I still remember being entranced when, as a teenager, I found my first wild ladyslippers in Wisconsin. That passion people to try to protect wild populations. Some of the strongest support for our foundation’s efforts to conserve wild orchids comes from people who genuinely love these plants and who grow them responsibly.The Orchid Conservation Alliance is a great example of this. The Slipper Orchid Alliance, the Quito Orchid Society, and the Quito Botanical Garden are other groups with members who are passionate about conserving orchids in the wild and who have helped us do our conservation work.

Remember, horticulturalists who really love these plants make sure they only buy laboratory-grown individuals!

In Part 2 of this series we will announce our plan to protect some of Ecuador’s most endangered slipper orchids.