One of the most emblematic Andean birds is the Sword-billed Hummingbird, Ensifera ensifera. We have them in most of our reserves, but they are elusive and hard to photograph when we are hiking around. A few days ago, however, one of these wonderful birds landed in front of my kitchen window and stayed long enough for me to get my camera, so I finally got a picture of it. This species has co-evolved with several species of cloud forest plants with long tubular flowers; this hummingbird is the only organism able to pollinate these plant species. This particular individual may have been attracted to two of these co-evolved species, Passiflora mixta and Passiflora tarminiana, which both grow wild around my house (though this hummingbird is also perfectly able to feed from regular flowers too). 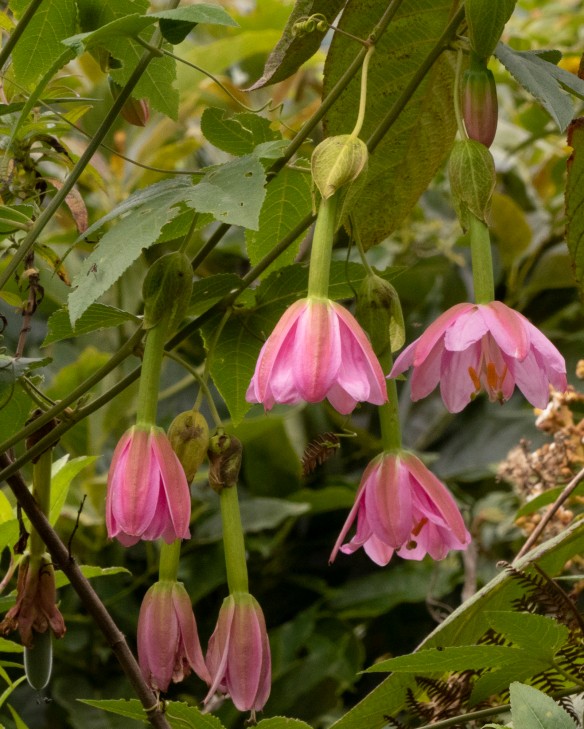 A large hummingbird like this needs lots of nectar for fuel, and each of the flower species that have co-evolved with this hummingbird have large nectaries loaded with sweet liquid.  Below I’ve made cross-sections of both these passionflower species, so you can see the nectar chambers at the base of the tubes:

All that nectar is a big temptation of other species too. Since  other species don’t have tongues long enough to reach the nectar, they have to rob the nectar by breaking into the nectaries, drilling or biting holes in the back of the flower. Nectar -robbing doesn’t pollinate the flower, so the robbed nectar is wasted as far as the plant is concerned. Flower variations that happen to be more resistant to robbers will have more nectar to offer the Sword-billed Hummingbird,  and will therefore get visited more often by it, and  will get pollinated more often and leave more descendants. Thus natural selection will eventually lead to flowers whose backsides are somewhat protected against robbers. The thickened “armored” walls of the nectaries are visible in the above cross-sections. 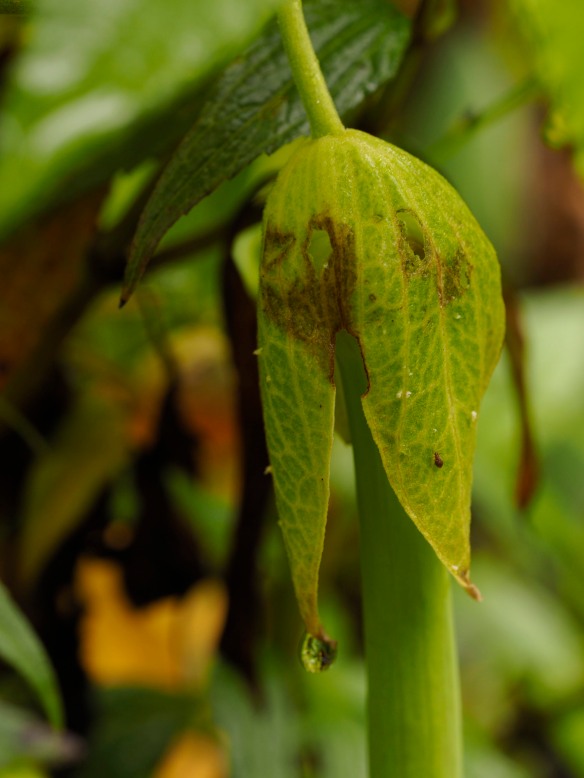 The base of this passionflower has been pierced multiple times by nectar robbers, probably flowerpiercers. Photo: Lou Jost/EcoMinga.

Still, some robbers get through. Several entire genera of nectar-robbing birds have evolved to take advantage of this resource. The most dedicated thieves are the eighteen bird species belonging to the genus Diglossa, the Flower-piercers. They often have sharp hooks on their bill tips to rip holes in the backs of flowers. Some of the species that rob these particular passionflowers are the White-sided Flower-piercer, the Masked Flower-piercer, and the Glossy Flower-piercer. Many short-billed hummingbirds also drill holes in the backs of the flowers, or use the holes made by flower-piercers. Bees also rob the nectar by biting holes in the back of the flowers, and butterflies steal their share by visiting the holes made by all these other thieves. Some passionflower species put tiny nectaries on the backs of their flowers to attract ants and wasps, which might deter some of these thieves.

The Slater Museum of Natural History of the University of Puget Sound in Tacoma, Washington kindly gave me permission to show their scan of the skeleton of this bird, surely one of the weirdest of all vertebrate skeletons. Note the huge keel of the breastbone (sternum), where the powerful wing muscles are attached in the living bird. Note also the bony base of the enormous tongue circling underneath and behind the head, and the little feet pointing backwards:

The Sword-billed Hummingbird occurs in most of our Banos-area EcoMinga reserves, at elevations from about 2000m to 3400m: Cerro Candelaria Reserve, Viscaya Reserve, Naturetrek Reserve, Rio Verde Reserve, Rio Zunac Reserve, Rio Machay Reserve, and Chamana Reserve. Our lowland Rio Anzu Reserve is too low for it.