University of Wisconsin Ph.D student Kelsey Huisman has been working on our local Teagueia orchids for the last two years. I’ve written several posts here about the surprising local evolutionary radiation of this genus (see here and here, for starters). Until 2001 the genus was thought to be a tiny genus of only about six species, all from Andean Colombia and Ecuador. In that year I discovered four new species of Teagueia in a single square meter of moss on a mountain near my home in Banos. Since then, my students and I have discovered a total of over 30 new Teagueia species here. Kelsey’s fieldwork is expanding our knowledge of this astonishing evolutionary radiation.

She wrote an article about her experiences in our mountains, and it was just published in the August 2020 issue of Orchids, the magazine of the American Orchid Society (which provided support for her work):

“As we continued up the difficult and dangerous trail, we came to the site of the crashed airplane, where around 50 years ago two men were not lucky enough to make it off the mountain alive. We paused in awe. Again, in the distance, we could hear branches breaking. The puma. This time it was behind us. I began to feel nervous because we were
being stalked.” 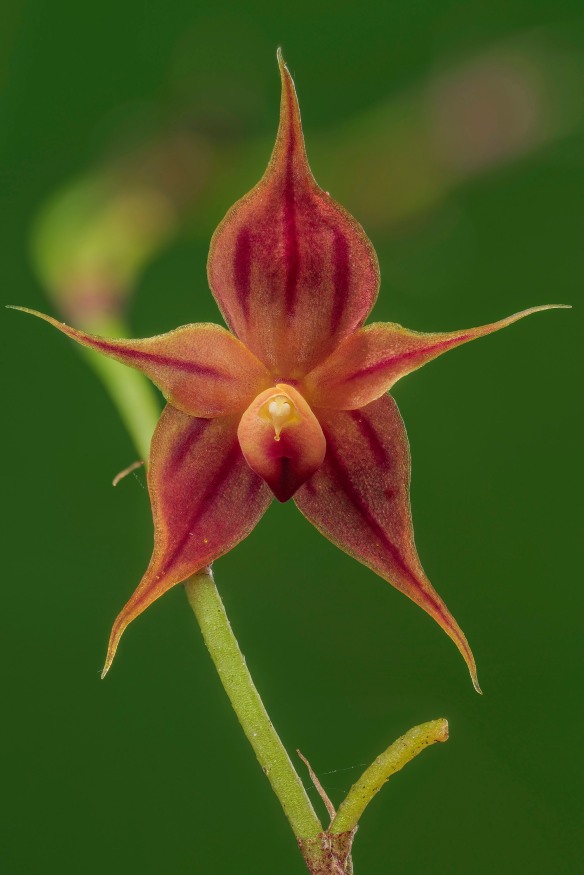 Teagueia puroana, which I discovered on what is now our Cerro Candelaria Reserve. It is named after Puro Coffee (UK). Puro Coffee’s donation to the World Land Trust enabled the Trust to finance our original purchase of the land for this reserve. Photo: Lou Jost/EcoMinga.

Kelsey and her partner Eduardo Peña gave me the chance to photograph many of the species they collected, including the new ones they discovered and many of my earlier dicoveries. For most of these species it was the frst time I was able to apply the technique known as “focus stacking” (taking hundreds of high-resolution pictures while moving the camera a few micrometers forward between shots, to create enormous depth of field without having to stop down the lens, which would cause loss of resolution due to diffraction) so these pictures are big improvements over my previous photos. I felt that now, after waiting many years, I  finally had adequate material to advance my descriptions of the many undescribed species of our area. My story about working on this during the pandemic lockdown appeared in the May 2020 newsletter of the World Land Trust.  I reproduce parts of it here:

In Ecuador we are locked down from 2pm to 5am. No one is allowed to leave their house during those hours (though, this being Ecuador, many people pay no attention to the rules). From 5am to 2pm we can go out, but only for necessities, and most businesses are closed. People can only drive one day a week. No driving at all on weekends. This is an economic disaster for all of us. No visitors, no meetings, no trips to our reserves. But there is a silver lining. Lots of time to concentrate. It is my opportunity to write up the scientific descriptions of some of the orchid species I have discovered over the years. Life has repeatedly interrupted these descriptions, but now is my chance.

Me at work. Photo: Lou Jost/EcoMinga

It’s an involved process. I’ve already done the hardest part, though, hiking up unexplored mountains for days at a time, searching the moss-covered forests for never-before-seen orchids. The tricky part isn’t the hiking (though that is hard enough) but building up enough experience to recognize something unusual. When I find a candidate, I collect a leaf and flowers, or the whole plant if there are multiple individuals. The flowers go straight into a vial of alcohol, which preserves them forever as white ghosts of their former selves. I have eight thousand such orchid-filled vials covering large areas of the floor in my house, all numbered and catalogued. This is my raw material for the scientific descriptions.

The next step is to check whether a candidate orchid really is a new species. I examine the print and online literature, and write to appropriate specialists. When I am sure that I have something new to science, the formal description process begins. I must illustrate every detail of the flower, and this usually means examining, dissecting, and photographing the submerged white alcohol-preserved flower. This is easier said than done. Many of the species I work with are shockingly small and require the use of microscopes for visual examinations. I use tiny scalpels and scissors designed for eye surgery to make the dissections.

Photography of the tiny details is even harder and requires special techniques and equipment. It has taken me years to perfect these techniques and, in some cases, to invent new methods. Only in the last few months have I developed the technology and bought the equipment (patched together from used parts that appear on eBay) to reach the level of quality that these orchids deserve. A computer controls both the camera and a motor that turns a microscope focusing dial. Hundreds of pictures are taken in succession, with the computer moving the microscope focus a few microns between each picture. Each picture is only sharp in a very thin slice of the orchid, because the depth of field is only a few microns at these high magnifications, less than the width of a human hair. Special software then combines the sharp parts of each of the hundreds of photos, to make a single photo that is sharp from front to back. The absence of traffic vibrations thanks to our lockdown is a tremendous help in this process; the smallest vibration ruins a microphoto. These photos have been revealing a rich and unexpected diversity of microscopic surface textures on the flowers. Traditionally these textures have not been described in much detail, but these hairs and knobs and clubs must be important in interactions with the insect pollinators, and I am going to include information about these structures in my new descriptions.

Some of my microphotos will be published directly in the description, while others are used to guide my botanical drawing of the new species. These drawings are traditionally included in the publication of every new species. I used to do them in black carbon ink using an old-fashioned pen with nib, but now I draw digitally on a large touch-sensitive computer display. I am guided by the photos but also have the real specimen at my side under a stereo microscope, to resolve ambiguities in the photo.

For the publication a complete set of measurements of every flower and plant part is needed. For the smaller parts, I make measurements electronically from a calibrated photograph. I must also convey the variability of the species, so I examine multiple individuals if I have found more than one.

Then I have to name the new species, using the Latin binomial system developed by Linnaeus nearly three hundred years ago. The first word is the genus  or “surname” for the plant, and this is almost always already determined (though I did get to co-author one new genus, Quechua). The second word is the species or “given” name, which distinguishes it from its relatives, There is a time-honored code of nomenclature governing these names, with some rules dating from Linnaeus himself.  A name, once given, is forever;  even Linnaeus’ names are still in use. I often name things after the location where it was found, or some feature of the plant. Lately I have been naming some of them to honor people who have supported conservation of their habitat, or to honor loved ones of those supporters, in conjunction with the World Land Trust and other conservation organizations.

The preserved specimen which serves as the basis of the description must be deposited in an official herbarium (plant museum). There it will be available to anyone who wants to study it. Some herbaria are now digitized so that anyone in the world can examine the specimens. (Unfortunately that does not work for my orchid flowers, which are kept in alcohol at the herbaria.)

In addition it is now common to sequence the DNA of a new species to see how it fits into the orchid family tree. I can’t do that at home but my scientist friends often do it for me.

The last step of the description is the final test, submission of the description article for publication in a peer-reviewed scientific journal. The article will be examined and criticized minutely by several experts to check if the arguments in the paper are valid. If they agree that I have adequately supported my claim that the species is new to science, the paper is revised to correct any deficiencies found by the reviewers, and then it is accepted and published. On the day of publication the name becomes the official permanent global scientific name for that species. Yippee!

2 thoughts on “Kelsey Huisman writes about studying our Teagueia orchids”